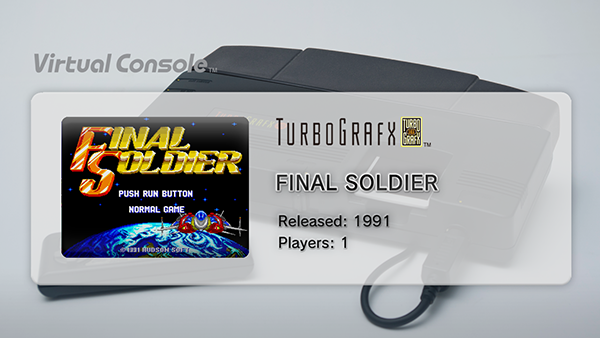 Final Soldier is a vertical-scrolling shooter from the acclaimed Star Soldier series.
Set in the 23rd century, aliens from the future have suddenly started invading Earth and it’s up to the fighter jet “Dryad” built by the combined efforts of scientists all around the world to stop the invasion.
Your ship can collect power-up units and equip options as well as blast various attacks such as Lasers, E-Beam, Fire, and Missiles.
The Set-up option will allow you to select the difficulty and also choose which of the three types of weapons you want to use when you power-up during the game. The key to beating this game is selecting the right weapons for the right enemies.
In addition to the Normal mode, you can also play the 2 Minute Game and the 5 Minute Game to challenge how much score you can earn in a limited time. These score attack modes are said to be the best balanced out of the entire series and will surely keep you in suspense!